Everyone should be thinking about their retirement plans, and bitcoin can help you achieve this major life goal.

Before finding bitcoin, I was investing heavily in real estate to take early retirement and build generational wealth. When I discovered bitcoin and understood its value and future implications for the world, I knew bitcoin would be the best asset I could ever buy to maximize the time I could spend with my family. From a generational wealth perspective, I realized that I would be able to install my family with a perpetual wealth preservation machine, bitcoin. You have the same opportunity to do this for your family with as little as 0.001 ($ 68) or 0.01 ($ 680) of a bitcoin. As of this writing, bitcoin is worth $ 68,000 per coin.

Nothing in life is easy and there is no get-rich-quick scheme that will allow you to achieve early retirement or generational wealth. You have to work hard! I have worked really hard to learn more about real estate and I know it will help me retire early, but bitcoin will get me there much faster. The over 1000 hours I spent learning bitcoin have been the hard work I had to do, and I continue to learn more about bitcoin every day! You can never stop learning about Bitcoin. I live by the mantra, “The day you stop learning is the day you die.”

I have used this tool for my calculations in case you want to run your own retirement calculations for your specific scenario. My calculations do not take into account inflation, cost of living adjustments, and other variables that traditional financial planners incorporate into retirement planning calculations. The beauty of bitcoin is that its huge rate of return avoids having to really factor in these variables.

Let’s start by planning for the retirement of someone who owns 0.01 bitcoin and wants to retire in 15 or 30 years. Here are my CONSERVATIVE and SEMI-CONSERVATIVE calculations to find out how much you could have in retirement:

The person has 0.01 bitcoin 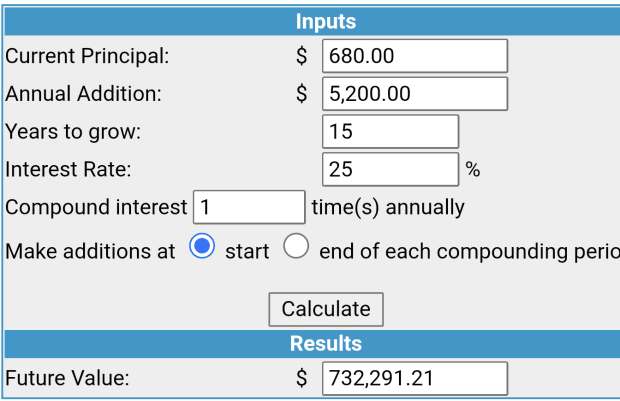 As you can see, the power of compound interest is magnified over a 30-year period versus a 15-year period. That’s why it’s important for people to start planning for retirement as early as possible.

Now let’s do the same calculations above but be SEMI-CONSERVATIVE and use an interest rate of 37.5%: 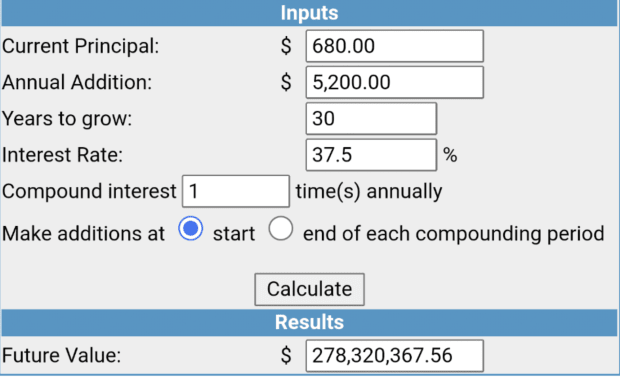 The person has 0.01 bitcoin 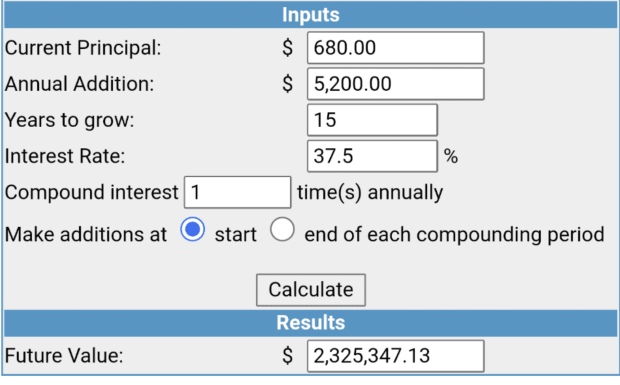 Now let’s plan for someone who has 0.001 bitcoin and wants to retire in 30 years: 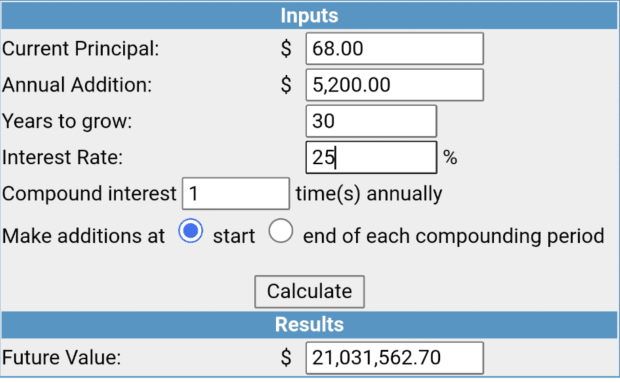 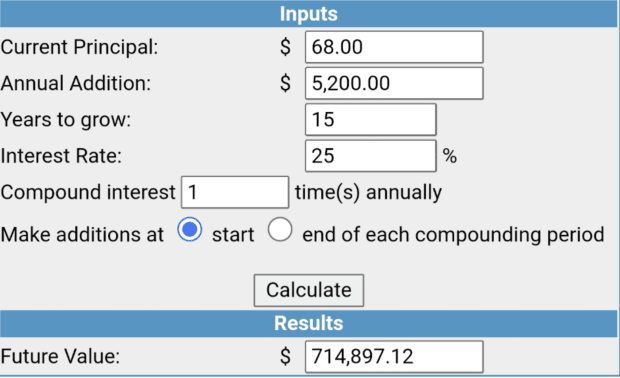 Identical to scenario 5 but over a period of 15 years: 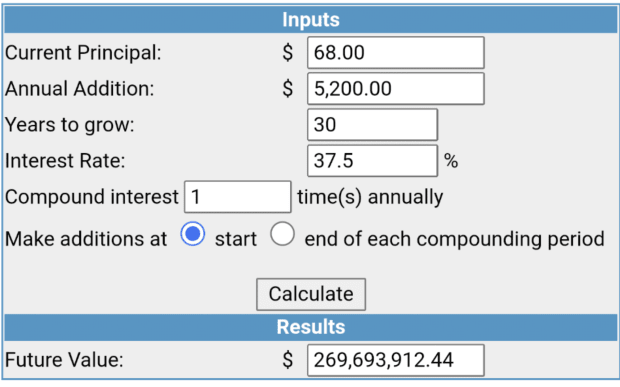 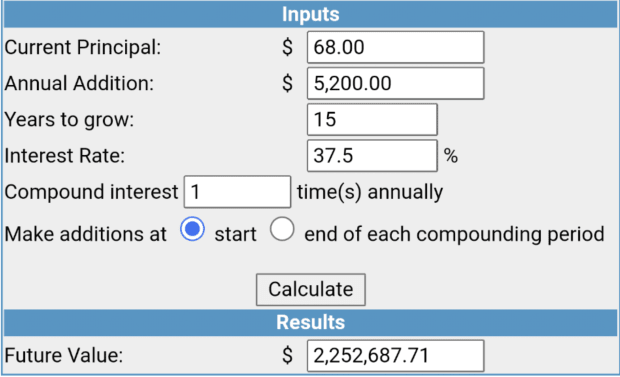 Same as scenario 7, but over a period of 15 years:

As you can see, whether you have $ 680 of bitcoin (0.01 of bitcoin) or $ 68 of bitcoin (0.001 of bitcoin), please do not consider what you own to be insignificant. The above calculations prove that you should treat your Bitcoin with the utmost care and respect. Please treat any Satoshi you own as “chunks of your most precious TIME”.

If you want to run some numbers over a 5 year period, in my opinion compound interest rates from 100% to 200% would be considered sustainable and easily achievable. Here are some other scenarios that are very feasible for people to reach EARLY RETIREMENT. 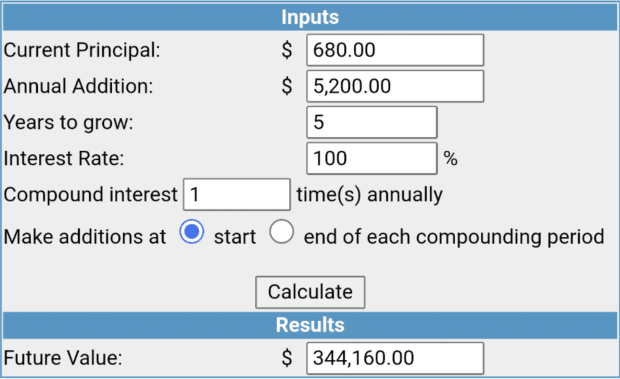 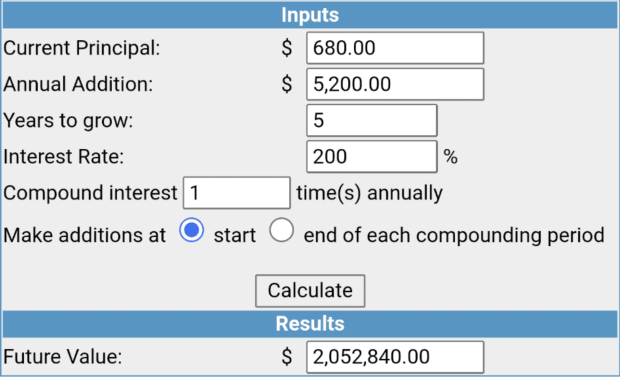 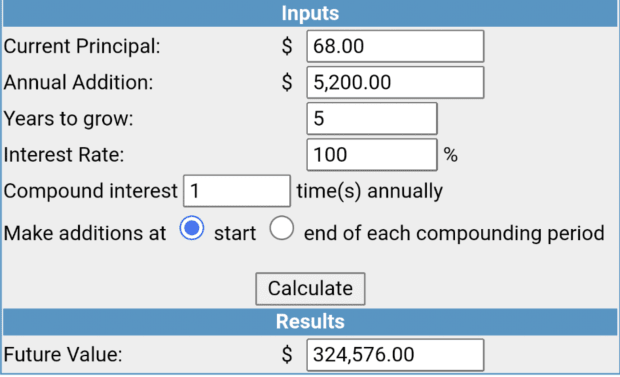 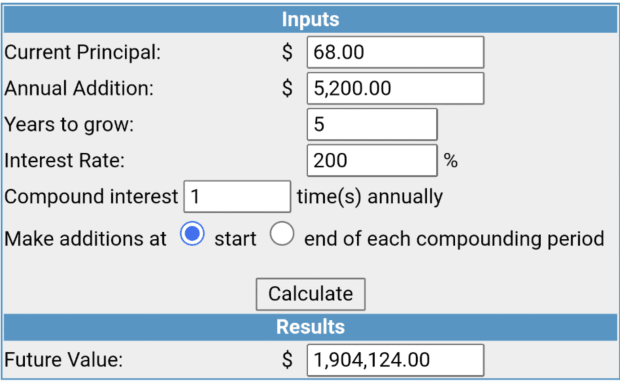 For scenarios 9-12, I describe them as conservative and semi-conservative scenarios against historical interest rates of 100% and 200%. It would roll the eyes of a traditional retirement planner, but bitcoin is not a typical investment and traditional investors fail to understand the implications of bitcoin that are changing the world and justifying these “conservative” and “semi-retirement calculations.” -conservatives “.

As you can see, in five years, with just 0.001 bitcoin and $ 100 in savings per week, you can achieve early retirement in a feasible and justified way. Do not take the satoshis you own lightly, as any irresponsible action of not protecting your precious satoshis could literally cost you TIME. Bitcoin is an asset that allows you to save and exploit your hard earned time. As Archimedes said, “Give me a long enough lever and a fulcrum to place it on, and I will move the world.” Bitcoin is the lever and your TIME is the fulcrum.

In conclusion, many people don’t realize how their bitcoin can sustain perpetual and generational wealth for hundreds of years. Here is a final calculation to demonstrate this notion, if you only have 0.1 bitcoin ($ 6,800 of bitcoin). After 50 years of 25% compound interest and you save $ 100 / week, a person could become a billionaire. 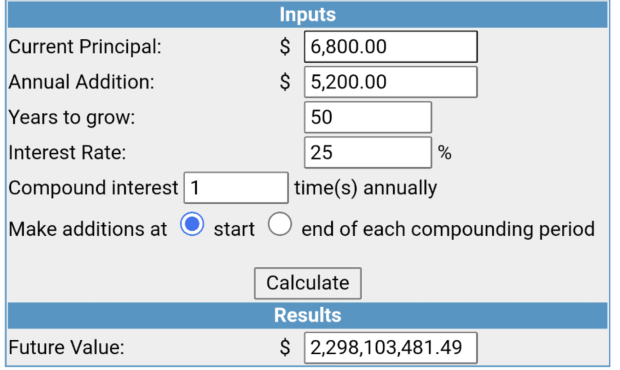 A lot of people laugh at me when I show them these calculations, but few realize that these calculations are VERY CONSERVATIVE. For the purposes of this article, I wanted to be very conservative in demonstrating how bitcoin can be life changing from a generational wealth perspective.

This is a guest article by Jeremy Garcia. The opinions expressed are entirely their own and do not necessarily reflect those of BTC Inc. or Bitcoin Magazine.

Mortgage rates are rising, but buying a home could still be a good investment

Liz Weston: Gifting Large Goods, Even After Death, May Have Conditions

Joe Cotton: Take a close look at the stock market and love mining Hut 8 as your top…